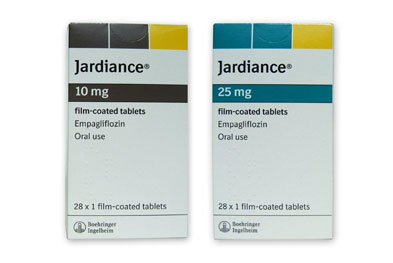 By Ransdell Pierson
(Reuters) - Eli Lilly and Co's new Jardiance diabetes treatment has begun stealing market share from rival drugs in its class, the company said on Tuesday, bolstered by clinical trial data showing it slashed deaths by 32 percent in patients with Type 2 diabetes.
In a three-year study whose results were released last summer, Jardiance became the first diabetes therapy to show robust ability to reduce cardiovascular death.
Jardiance, which won U.S. approval last year, belongs to a new family of treatments called SGLT2 inhibitors that include Johnson &amp; Johnson's $1.3 billion-a-year Invokana and AstraZeneca Plc's Farxiga. They flush excess blood sugar from the kidneys.
Jardiance now accounts for 25 percent of new U.S. patients taking SGLT2 inhibitors, up from a 15 percent share before the Jardiance trial data were released in August, Lilly said on Tuesday.
In addition, use of sulfonylureas, a class of inexpensive generics that patients typically try before being moved to a costlier newer drug, has declined as Jardiance sales have taken off, Lilly said in a conference call describing its 2016 earnings expectations.
Johnson &amp; Johnson was not immediately available for comment.
The positive results of the trial have not yet been included in the drug's label and it could take medical societies another year or longer to draft new treatment guidelines incorporating the data.
"Once we get the label (change), we believe Jardiance will become the leader in the SGLT2 class," Lilly diabetes head Enrique Conterno said in an interview on Tuesday.
The details about Jardiance helped lift Lilly shares on Tuesday as much as 3 percent.
There has been a push away from the sulfonylureas because of the risk of hypoglycemia, or dangerously low blood sugar, said Dr. Jason Gaglia of Joslin Diabetes Center in Boston.
Some insurers and pharmacy benefit managers have placed Jardiance ahead of Invokana on their lists of preferred covered treatments known as formularies, Gaglia said.
Guggenheim Partners analyst Tony Butler said some payers have discouraged use of Jardiance, whose $4,000 annual cost greatly exceeds that of inexpensive generics that are mainstays of early treatment.
But Butler said he expects them to relent once the label change is made and medical societies endorse the drug. Jardiance could generate annual sales of up to $5 billion, he said, with Lilly splitting profits with its partner, Boehringer Ingelheim of Germany.
Data from Invokana's long-term heart safety study is not expected until 2017, followed by Forxiga's data in 2019. Until then, Lilly can boast that Jardiance is the only SGLT2 inhibitor shown to improve survival. カナグリフロジンで治療した2型糖尿病患者の血清ケトン体の増加のための被験者内および被験者間変動 Intra- and Inter-Subject Variability for Increases i ...